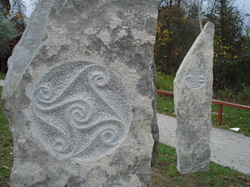 Cosmogrammes are a form of communication between human beings and elemental beings... The dialogue is created with the interplay of light and shadow on carefully designed line drawings (cosmogrammes) carved into stone.

Marko Pogačnik was born in 1944 in Kranj, Slovenia, and graduated in 1967 as sculptor from the Academy of fine Arts in Ljubljana. He lives with his wife Marika in Šempas, Slovenia. They have three daughters and five grand children. From 1965 until 1971, Marko worked as a member of an international art group called OHO in conceptual art and land art. Exhibitions include Information Show at the Museum of Modern Art in New York City (1970), Aktionsraum, Munich (1970), and Global Conceptualism Show 1950-80, Queens Museum of Art, New York (1999). Most of the collection of OHO works is housed by the Museum of Modern Art in Ljubljana. In 1971, with his family and friends, Marko founded a rural artistic community and spiritual center called the "Šempas Family" in Šempas, Slovenia. The community lasted until 1979. Exhibitions by the Šempas Family include Trigon (1977) in Graz and the Venice Biennale of 1978. Since 1979 he has been engaged in geomantic and Earth healing work. In the mid-1980s, Marko developed a method of Earth healing, "lithopuncture" (similar to acupuncture), using stone pillars positioned on acupuncture points of the landscape. He is the author of numerous books, including:
His Books:

The Inner Life of the Earth (Paperback)
Exploring the Mysteries of Nature, Subnature, and Supranature ​

​Venice (Paperback)
Discovering a Hidden Pathway
Visit his website at www.markopogacnik.com
Back to Standing Stones